Heating and cooling costs are one of the most variable and often high expenses homeowners can face. Taking steps to reduce the amount of energy it takes to heat or cool your home, is one way to help lower the costs. Even setting the thermostat lower, or higher in the summer, can make a huge impact on your home’s energy usage. However, just because you set your thermostat to the ideal setting for both comfort and energy savings, that doesn’t mean it is actually staying at that setting. END_OF_DOCUMENT_TOKEN_TO_BE_REPLACED

Cary, NC – March 9, 2016—There are five words homeowners dread more than almost any other: “It needs to be replaced”. Major replacements, like a roof or HVAC system are particularly troubling for homeowners. Unexpected expenses and the high cost of replacement can be devastating for a family, but Air Secure Inc. believes they can offer a solution for HVAC systems. END_OF_DOCUMENT_TOKEN_TO_BE_REPLACED

A brief rundown of heating methods

In the early years, residents of the United States relied on wood to heat their homes because the continent was covered in forests that made for an easy-to-gather and plentiful supply of fuel, so most homes were heated with a wood burning fireplace or the Franklin stove. Actually, it wasn’t until about 1885 that the country started to burn more coal than wood.

Toward the end of the nineteenth century, the inexpensive cast iron radiator combined with the steel-riveted coal furnace would bring a version of central heat to American homes. These two sources of warmth would be the primary methods of home heating until the mid-1930s when the first forced air furnace that used coal was introduced. Shortly after that, an oil and gas-fired version of the forced air furnace came along and saved families from the task of keeping the fire in the basement burning.

Today, approximately 60 percent of residences are heated with gas furnaces known as FAUs or forced air units. An additional nine percent of the units are oil-fired. In milder climates it’s common to heat homes with a FAUs that use an electric heat pump that supplies both heating and cooling energy.

Moving on to the details

In the earliest days of the nation, brick or stone fireplaces fueled with wood were the primary source of heat. These fireplaces tended to be larger than the ones we use today. In fact, they usually dominated an entire wall of a room. In addition to supplying heat, fireplaces were also used for cooking and heating water for laundry and bathing. Since many homes at the time were single rooms that acted as living and sleeping areas, this type of heating worked very well. However, ventilation tended to be poor, so a great deal of smoke and soot drifted into the room. Fireplaces also became a less efficient form of heat as the size of homes increased.

Which brings our story to the invention of the Franklin stove. It was created by founding father Ben Franklin and was intended to make less smoke and more heat than an open fireplace. The fireplace itself was metal lined with a hollow baffle located near the back. The baffle was intended to transfer more heat to the room’s air using an inverted siphon. By forcing the heat to travel through ductwork, more heat was transferred to the room without all the mess of soot and smoke.

The next improvement came with the combination of the steel-riveted coal furnace and the forced air furnace. This was still prior to the days of electricity being common in all homes, so it depended on natural convection to move the heat through the ducts from the basement unit. The downside to these radiators was that they became extremely hot when they were in use. It is also interesting to note that it wasn’t uncommon in warmer climates to simply use window units that heated or cooled the air in the house.

A short time later, gas or oil filled tanks eliminated the need for coal to be kept in the basement or for anyone to worry about the furnace going out on a cold night. In addition, electricity and the blower wheel moved air from the basement through floor vents and eliminated the need for radiators and soon replaced the coal furnace. This remained the standard until FAU gas and electric units came on the market. These forced air units rely on vents, ductwork and plenums to distribute air and are separate from the heating and air conditioning system. The return plenum takes air from several return grills to a central handler for heating. The supply plenum moves the warm air to the rooms the system is designed to heat.

A heat pump is also a FAU system, but it differs because they are designed to both cool and heat spaces. When used for heating, it utilizes the same type of cycle as a refrigeration system, but it operates in the opposite direction and releases heat into the space. Generally, heat pumps draw heat from external air that is cooler or, in some cases, from the ground.

It was a long trip from the huge fireplace dominating a room to today’s ultra-efficient heating systems that help us to live comfortably in cold weather climates. There are likely newer technologies coming that will utilize geothermal and solar power to make heating homes and businesses less expensive and more efficient.

Gas furnaces are the main type of furnace we encounter in Raleigh NC and all of central North Carolina. They are the primary type of heating system used here in the United States. They operate via forced heating. Cool air goes in, the air is heated by direct application of flame, and the warm air comes out. They sound simple enough when they are working, but then they are broken that is when you need someone like us, or someone who services your area to com in and perform a furnace repair.

The heating cycle begins with the thermostat. The thermostat knows when temperatures have gone below the current setting. For example, if you have the thermostat set to heat at 68 degrees, when the temperature gets down the 67 or lower, the thermostat triggers the fan which pulls air through the heating chamber. At the same time a valve opens to allow gas to flow into the burners. A pilot flame or spark then ignites the gas which heats up the surrounding air. After the gas flame begins to heat the air, the unit’s blower motor starts and pushes warm air out. As the warm air is pushed out, cold air is sucked in through the return ducts in each room.

Before the cold air reaches the furnace, it must first be filtered clean of dust. Dust in the furnace will adversely effect its operation

As seen in the image, the exhaust stack lets fumes out of the home.

Blower motors, heat exchangers, igniters, etc are all common failures in heating systems and furnaces. If something breaks we are happy to come take a look at it for you. If you have an old unit, it may be time for a new system. We do free estimates on new installs. Of crouse, we always fix what we can and are happy to service all of central North Carolina and Raleigh with heating and furnace repairs.

We hope someone finds this article informative and that you do not need us! But, we’re here, and we’re locally owned and operated. 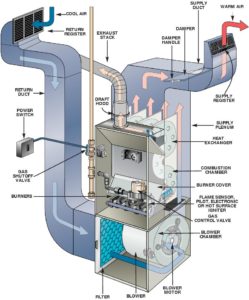 Our main office is right beside Cary Parkway and Old Apex Road. We are local to Apex and can be in Apex in no time, and service heaters and furnaces in Apex. We have served the entire triangle for several years.

Fun fact: Apex NC gets is name from being the highest point on the railroad between Richmond, VA and Jacksonville, FL.

Air Secure provides service for residential and commercial customers in Apex, NC with furnace repair, heating and air conditioning repair, service and new installations. We are a local, family owned and operated business that focuses on residential, new construction and commercial. We specialize in professional repair and service of existing HVAC systems. We service all major brands of furnaces and heating systems promptly. We offer competitive pricing and provide detailed estimates of all work to be done before we begin the repairs.

Chapel Hill NC is generally a very warm area, except in the winter. When the furnace goes out we hear about it and get it back on for you as quickly as possible.

Chapel Hill is one of the most common areas that we service furnaces. We provide diagnostics to determine if you need furnace repair or furnace replacement. Most heating units can be repaired. Each unit is different and common issues are the burner component which includes the heat exchanger, draft inducer, and venting. We also see problems with the blower, controls, and safety devices.

Since we are in Chapel Hill often, we can generally make it there the same day. If you are experiencing problems with your furnace or heater please give us a call.

Hear from Our Customers

"I am very impressed and more than happy with Air Secure. I called in the morning with no heat and was concerned with our newborn at home. They had someone out that very day to diagnose the problem. When the technician arrived he was very polite and professional. He was extremely thorough and made sure that we were being treated fairly. After finding out the problem they were able to fix it that day. I would and have recommended this company to everyone I speak to."